At the Geneva International Motor Show, Goodyear unveiled a very interesting tire concept: the “Eagle-360” – a spherical tire that allows cars to move in multiple directions. The tires are not directly attached to a car’s chassis but are instead suspended underneath its body, using magnetic levitation rather than axles in order to rotate.

Goodyear isn’t the first company to envision using spherical tires, but they may have come up with the perfect solution to how they can be attached: magnetic levitation.

It may seem a bit futuristic, but using magnets to keep the tires in place will enable the vehicle to move freely in all directions. Having no physical contact between the car’s chassis and the wheels will also result in a smoother ride.

Goodyear officials did not yet give concrete information on how the new technology will work, but instead compared the design to how existing magnetic levitation trains work. Magnetic trains use electrically charged magnets that lift the train cars a few inches above the tracks. Once the entire train is floating above the tracks, electricity then flows through coils within the tracks, creating magnetic fields that set the train in motion. My guess is that Goodyear will apply certain parts of this system to their design. 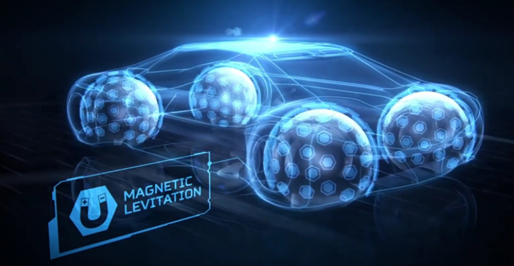 In addition to easier parking (though cars may be self-driving in the near-future, so you might not need to worry about parking at all), spherical tires would also significantly improve a vehicle’s maneuverability.

With spherical tires, only the wheels themselves need to change their direction making it easier to avoid unexpected obstacles.

Futuristic cars moving along at a steady pace

It may be quite some time before we see an actual vehicle with spherical tires on the road, but it’s always great to see established companies like Goodyear find creative ways to use technology to improve how things work.

Apart from their Eagle-360 tire concept, the company is also looking to use cutting-edge tech such as sensors, 3D printing, and biomimetic design for vehicles. Biomimetic are human-made things that imitate nature, they are mimicking biological systems.