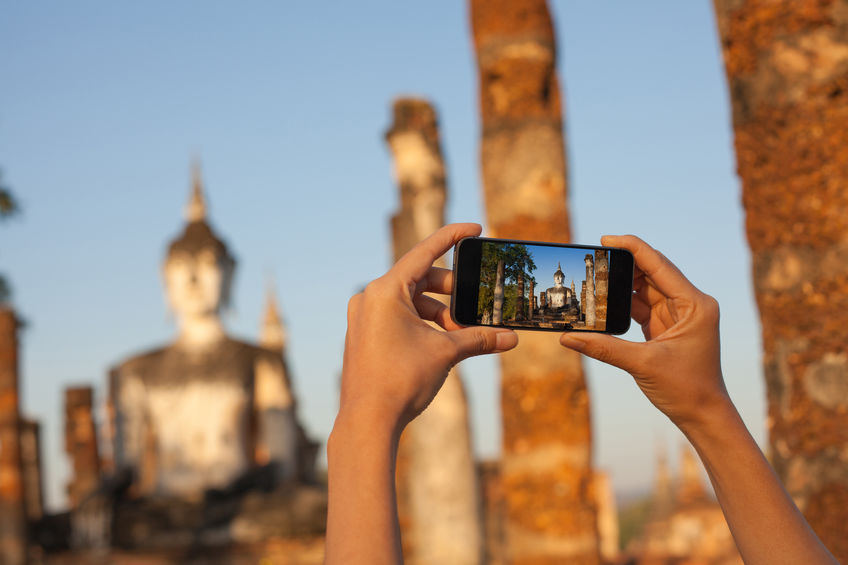 Believe it or not, your iPhone is a pretty incredible device when it comes to taking pictures. Thanks to regular improvements to technology and our own mini-computers, the camera app on our phones have become more robust.

In fact, they’re about as good as one of the low-end cameras in terms of picture quality. Pair that up with simple design and clear features, anyone can use it.

But if you’re looking to take some amazing shots, there is going to be a slight learning curve. After all, to take amazing shots, you’re going to need to learn the ins and outs of your iPhone’s camera app. And there is more to it than you’d think.

For example, are you aware of the shortcut to access your camera? The problem with any camera is that it takes a little while to load up and be able to snap a picture. It might not seem much but every photographer knows you can lose an amazing shot in a short time if you’re not prepared.

For iPhone’s it’s the same thing where getting to the app takes time. However you can work around that by turning on your phone and swiping up. You can access this even from the lock screen.

Have You Considered Third-Party Apps?

With how many helpful apps out there, there is bound to be some good photo apps as well. That much is certainly true as Apple has opened a lot of their controls to developers.

From shutter speed, to white balance and exposure, developers have used these accessible controls to form quality third party camera apps. While the default camera is still pretty good, these third-party apps can provide better clarity.

Here is a list of some of the good ones to consider. Of course, these apps are great if you’re not in any rush to take a picture.

Knowing Your Shooting Modes And Using Them Properly

Amazing shots boil down to a deeper understanding of everything about your iPhone’s camera. One key feature is being familiar with the various modes like panorama, photo, and square. While all of it seems like common-sense, it’s advised to take the picture in the mode you intend to publish it for. For example if you’re snapping a picture for Instagram, consider square mode to capture your intended shot. If you went for photo mode, you’d have to crop it to fill the spot and that can be trickier.

Know The Rule Of Thirds

Did you know that the iPhone has grid lines for the camera app? This is one feature that every photographer should be aware of mainly because you can take advantage of the rule of thirds.

For those not familiar with the rule of thirds, it’s simply a guideline. The guideline states that a photo in general is more appealing and interesting compositionally if the important elements of your shot are on one the grid lines or their intersections.

To get to grid lines check Settings and under Photos & Camera there is an option titled Grid.

Proper Use Of Flash

While technology has improved, some things are better left off. This is the case with the camera’s flash function. While flash is important for particular shots on a camera, this isn’t the best camera that uses flash.

Part of the reason for that is that the light it uses is an LED light. So from a photo shot perspective it’s not that bright and thanks to to TrueTone technology, it’ll cause your shots to have an odd hue to them.

So regardless of the circumstances, it’ll likely ruin an otherwise great shot.

In this case, always make sure you’re using natural light for your photos or some other external lighting source. If you are using your phone for night shots, consider the camera’s exposure slider to boost light in the photo. Another option is getting another external light source like a strong flashlight or a pocket spotlight.

Burst mode became available for iPhone 5s and above as a way to take pictures of moving subjects. However some photographers have also found that this mode is also good when the camera is moving as well. Possible scenarios are going for rides on a roller coaster or car, running after kids, or trying to get into sports photography.

Burst mode is merely taking a series of pictures in quick succession. To get into that mode, tap and hold down the shutter button. When holding the shutter button, you’ll see a counter indicating the number of shots you’ve taken. Stop by removing your finger from the button.

But knowing that you’re good while you or your subject are moving is good to know. You can still take shots and pick from a variety of shots while in that mode.

Every iPhone comes with a feature called High Dynamic Range. Otherwise known as HDR. Through this software, you can snap photos with ease despite the shot having high contrast light sources. In most other situations, a picture would be distorted by either the light or the dark area of the picture.

Because the iPhone recognizes that, it takes two pictures in quick succession at different exposures. It then merges into the unified image you’d see.

You can manually turn this on or off from the app itself, but all iPhone 5s and up have a feature called HDR Auto. From the iOS 8 update, the software pays attention through the sensor on your iPhone. It’ll turn on when it becomes necessary. To see if HDR is on, it’ll be indicated by a yellow dote above the mode you’re on.

Another helpful feature is the locking mechanic. Accessed through tapping on your screen in a certain spot, this is great for macro photography. That or you want your camera to focus on a specific frame or subject.

You’ll know if you locked if your screen via the AE/AF Lock alert. This means the exposure and focus are locked on that spot. You can remove this at any time by tapping on another area of the photo.

Proper Use Of Exposure

In an ideal world, all of our pictures will have enough light to take the shot we want. Sadly that’s not the case but there is a quick fix to that. When the image isn’t to your liking, you can tap once and focus on a specific square.

Once in that mode you can adjust the yellow exposure slider to adjust the lighting.

An iPhone is obviously thin and the cases themselves don’t always provide enough bulk either. Because of this, holding an iPhone has always been a touch awkward compared to traditional cameras.

This is a big deal to photographers because when you pair the awkwardness of the iPhone design (from a photo shot standpoint) with tapping a digital shutter button, you get shaky or blurry photos.

Thankfully Apple has made it easier via the volume up button. You can avoid shake entirely by holding your phone like a proper point and shoot camera.

Considering The Photos Themselves

Being aware of your tools helps a lot, but what’s also key is the photos you are planning to take as well. Like with everything in life, knowing all the techniques doesn’t mean you’ll instantly take amazing pictures. Below are some photo ideas and general rules for iPhone photo shots.

Amazing Shots Are Everywhere If You Look

There are all kinds of fantastic photo opportunities if you look for them. If you’re starting out, make sure to stick with simple pictures and keep these tips in mind. For more experienced photographers, I hope that these instructions have helped you improve your photos for the future.

Smart Lenses to Help You See Exponentially Better
Part 2 of my interview with Mike Blackmore, a Google Top Contributor
5 most helpful back-to-school apps